How it Works on Water Column & Sediment

How it Works on Water Column & Sediment

Results of Excessive Nitrogen and Phosphorus 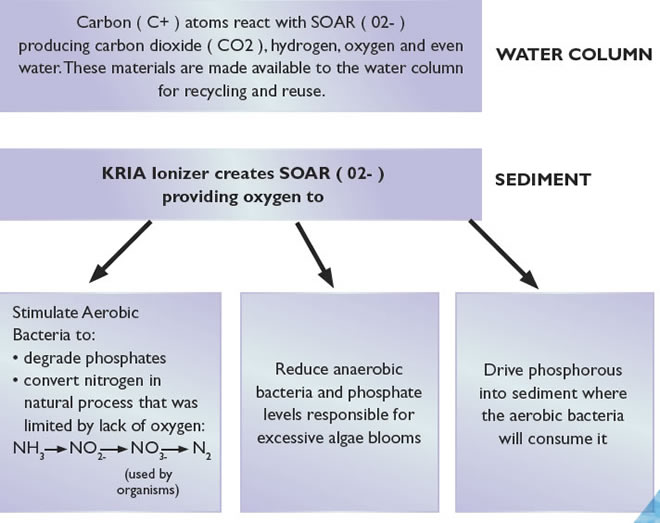 Water bodies can deal with excess nutrients to an extent; after that, they become impaired and cannot recover without outside assistance.

One way to render this assistance is to raise dissolved oxygen levels (DO) with superoxide (SO). SO is an oxygen molecule with an extra electron. This extra electron confers great oxidizing (or cleaning) powers. It also allows for super saturation of the water, meaning that more oxygen than normal can be stuffed into the water column.

SO will address excess nutrient problems, but in an indirect manner. In a natural setting,

SO will enable the mechanisms present in nature to deal with phosphates and nitrogen.

Second step in this process consists of the extra oxygen made available to fish and other aquatic life (including aerobic bacteria) to grow more robustly and use the phosphate for food themselves, thus depleting high levels of phosphates. Phosphates are the energy source for living cells and the higher the level of life activity in a water column, the more phosphates are consumed.

Just as SO will not react directly with phosphates, neither will it react directly with nitrogen. Nitrogen is processed by aerobic bacteria that are always present in the environment. However, in order to process nitrogen, these bacteria need oxygen and lots of it. The more oxygen that is available, the faster they work. Part of the nitrogen cycle process also includes the availability of SO. High levels of SO created by modern technology enables both of these processes of the nitrogen cycle.

Important: The difference between normal Aeration and SO (superoxide) is SO has an added negative electrical charge. This negative charge is why the Ionizer works as described above and aeration doesn’t.

Also, SO is a highly versatile molecule that is indispensable to life. Besides aeration, SO will also remediate any organic pollutant without producing secondary byproducts, eliminates harmful anaerobic bacteria (replaces chlorine), and destroys cyanobacteria and its neurotoxin, microcystin.